No injuries reported after flare at Phillips 66 refinery in Rodeo

Posted on May 19, 2015 by Martinez Environmental Group 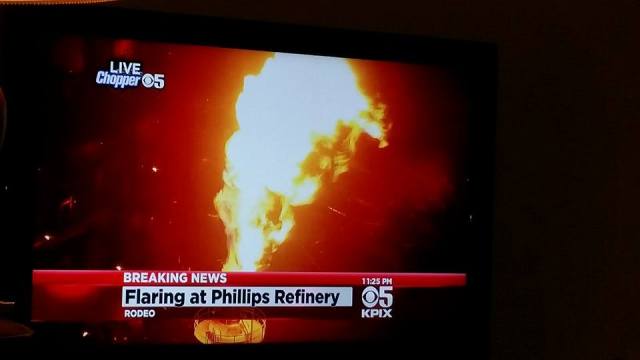 RODEO — No one was injured when a processing unit at the Phillips 66 refinery in Rodeo flared late Monday producing a bright flare in Contra Costa County, refinery officials announced Tuesday.

The flare occurred at 10:15 p.m. when one of the refinery’s processing units experienced a process interruption, according to refinery officials.

The refinery remained operational Tuesday and Phillips 66 officials said they would conduct an investigation to determine what caused the flare. As of mid-Tuesday morning, the flare was still going as the refinery continued to burn off excess material, officials said, but it less visible in daylight.

After the flare, Contra Costa County issued a Level 1 community warning for the incident, the lowest possible alert level.

While oil company officials say flaring is a normal part of refinery operations and happens less frequently than it did decades ago, large flares continue to draw attention.

An August 2012 blaze at the Chevron refinery in Richmond sparked a federal investigation and sent thousands of residents to area hospitals.