Crude By Rail Across America

Posted on January 26, 2015 by Martinez Environmental Group
MORE CRUDE OIL WAS SPILLED IN U.S. RAIL INCIDENTS IN 2013, THAN WAS SPILLED IN THE NEARLY FOUR DECADES SINCE THE FEDERAL GOVERNMENT BEGAN COLLECTING DATA ON SUCH SPILLS. 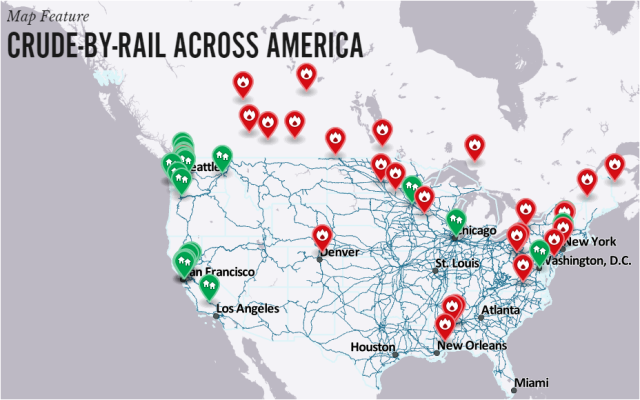 Since late 2012, as hydraulic fracturing and tar sands drilling created a glut of oil, the industry has scrambled to transport the fossil fuel from drill sites to the east and west coasts, where it can potentially be shipped overseas to more lucrative markets.

The increase in oil rail traffic, however, has not been matched with increased regulatory scrutiny. Oil trains are not subject to the same strict routing requirements placed on other hazardous materials; trains carrying explosive crude are permitted to pass directly through cities—with tragic results. A train carrying Bakken crude oil derailed in the Quebec town of Lac-Mégantic on July 6, 2013, killing 47 people in the small community.

In the absence of more protective regulations, communities across the country are beginning to take matters in their own hands.

Earthjustice represents groups across the country, fighting for protections from crude-by-rail:

DOT-111s are rail cars designed to carry liquids, including crude oil, and have been in service in North America for several decades. They are prone to punctures, oil spills, fires and explosions and lack safety features required for shipping other poisonous and toxic liquids. As crude production in the United States has surged exponentially in recent years, these outdated rail cars have been used to transport the crude oil throughout the country.

The U.S. and Canadian government recognized decades ago that the DOT-111s were unsafe for carrying hazardous materials, finding that the chance of a “breach” (i.e., loss of contents, potentially leading to an explosion) is over 50% in some derailment scenarios.

U.S. and Canadian safety investigators have repeatedly found that DOT-111s are unsafe and recommended that they not be used for explosive or hazardous materials, including crude oil; however, the U.S. government’s proposal to phase out these rail cars fails to take sufficient or immediate action to protect the public.

Q. WHAT IS BAKKEN CRUDE OIL?

Bakken crude refers to oil from the Bakken shale formation which is primarily in North Dakota, where production has skyrocketed in recent years due to the availability of newer hydraulic fracturing (“fracking”) techniques. The increase in the nation’s output of crude oil in 2013, mostly attributable to Bakken production, was the largest in the nation’s history.

Bakken crude is highly flammable, much more so than some crude oils. Today, Bakken crude moves in “unit trains” of up to 120 rail cars, as long as a mile and a half, often made up of unsafe DOT-111s.

Transporting Bakken crude by rail is risky under the best of scenarios because of its flammability. But legacy DOT-111s represent the worst possible option. All new tank cars built since October 2011 have additional some safety features that reduce the risk of spilled oil by 75%. Even so, safety investigators, the Department of Transportation, and the railroad industry believe tank cars need to be made even safer. Some companies are already producing the next-generation rail cars that are 85% more crashworthy than the DOT 111s. Petitioners support the safest alternatives available, and expect that the ongoing rulemaking process will phase out all unsafe cars.

In the meantime, an emergency prohibition on shipping Bakken crude in DOT-111s—which virtually everyone acknowledges is unreasonably dangerous—is required immediately. (Read about the formal legal petition filed on July 15, 2014.)

Q. WHAT STEPS HAVE U.S. AND CANADIAN GOVERNMENTS TAKEN?

The U.S. government recognizes that Bakken crude oil should not be shipped in DOT 111 tank cars due to the risks, but has done shockingly little to limit their use.

In May 2014, the DOT issued a safety alert recommending—but not requiring—shippers to use the safest tank cars in their fleets for shipments of Bakken crude and to avoid using DOT 111 cars. Canada, in contrast, responded to the Lac Mégantic disaster with more robust action. It required the immediate phase-out of some DOT-111s, a longer phase-out of the remainder, and the railroads imposed a surcharge on their use to ship crude oil in the meantime.

In the absence of similar standards in the U.S., the inevitable result will be that newer, safer cars will be used to ship crude in Canada—while the U.S. fleet will end up with the most dangerous tank cars.