“It does not make sense that people are separating the water puzzle into individual pieces, such as: the raising of Shasta Dam, Proposition 1, the Delta tunnels, BDCP, Sites Reservoir, Temperance Flat, CALFED, Delta Vision, BDCP, OCAP, the Bay Delta, Trinity/Klamath Rivers, the Sacramento River, the San Joaquin River, and water rights,” said Chief Sisk. “It is all one BIG Project.” 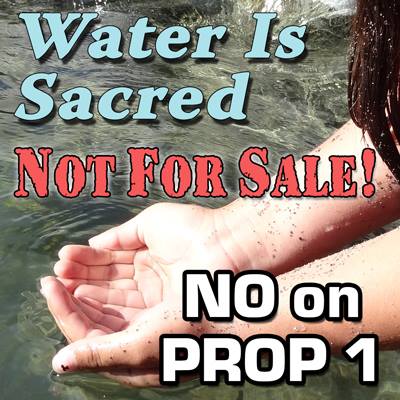 The Prop 1 opponents spoke and answered questions at Lake Redding Park, next to the Sacramento River by the salmon jump viewing area, as fall-run Chinook salmon make their long way back from the ocean to spawn and die, completing their life cycle.

Caleen Sisk, Chief and Spiritual Leader of the Winnemem Wintu Tribe, told reporters that the water bond, peripheral tunnels, Shasta Dam raise and other water projects now being planned by the state and federal governments are in in reality “one Big Project” that will destroy salmon, rivers and groundwater supplies.

“It does not make sense that people are separating the water puzzle into individual pieces, such as: the raising of Shasta Dam, Proposition 1, the Delta tunnels, BDCP, Sites Reservoir, Temperance Flat, CALFED, Delta Vision, BDCP, OCAP, the Bay Delta, Trinity/Klamath Rivers, the Sacramento River, the San Joaquin River, and water rights,” said Chief Sisk. “It is all one BIG Project.”

She emphasized, “You have to look at the whole picture and everything in between from Shasta Dam to the Delta estuary. We need to ask what is affected by our actions and who is benefitting from them? These are not separate projects; they are all the same thing that the State is asking us to fund – California water being manipulated for the enrichment of some and the devastation of cultures, environments, and species all in the name of higher profits.”

Continuing on the theme of Prop. 1 and the Brown Water Plan serving to create higher profits for the rich, Tom Stokely of the California Water Impact Network (CWIN) stated, “Once again, California taxpayers are being asked to fund massive public works projects that will benefit the wealthy, the politically connected, and the powerful at the expense of average citizens and the environment. Ultimately, taxpayers will have to shell out almost $14.4 billion to pay for the bond. This price tag includes $7 billion that must be added, with interest, to the State’s already crushing debt burden.”

“The bill for ratepayers will be $360 million a year for 40 years. It must be noted that this is money that could otherwise be spent on education, public safety, health care and reducing California’s massive debt,” he concluded.

“This bond does little for fisheries, little for multi-benefit flood protection projects needed in Northern California, and little to provide short or long term solutions to the water problems in our state,” he noted. “Proposition 1 will encourage private interests who desire to control water for their benefit and spend more public general funds to capture water that is already allocated and needed elsewhere.”

“The Sacramento River Preservation Trust rejects this bond because it would set a dangerous precedent, it doesn’t address the real problems that have created the symptoms we are struggling through today in California, and it does not include adequate funding for the major state water source regions within the Sacramento River Watershed. We strongly recommend a “NO” vote on Proposition 1 this November,” Ross-Merz said.

According to the Prop. 1 opponents, the water bond does nothing to address the current drought – and it shortchanges sustainable water programs that could safeguard California from inevitable future droughts,

They said Proposition 1 would promote “disproven, capital-intensive and destructive infrastructure projects over the innovative approaches that are California’s only real hope of developing a sustainable and equitable water policy. n short, this is an ill-conceived, wasteful, and ultimately cynical initiative. It is a backdoor attempt to put the interests of a handful of Central Valley agribusiness barons over the needs of cities, rank-and-file ratepayers, and our valuable and beleaguered commercial and sport fisheries.”

“Prop. 1 and its $14.4 billion debt is a bad deal for California,” explained Carole Perkins of the Butte Environmental Council (BEC). “California is in desperate need of real and long-term solutions and strategies to meet water scarcity, but Prop. 1 will not provide California water security. Water supply projects in the bond will only increase California’s water supply by 1%. Prop. 1 fails to mitigate the effects of drought, and does nothing to establish long-term water self-sufficiency. Prop. 1 reinvigorates the dam building era and pays for increased and long-term north-to-south water transfers.

Perkins said the bond allocates too little money for true water supply enhancement and too much money for pork barrel projects that will do little for water supply. Prop 1 promotes greater groundwater banking and out-of-region water transfers – both of which would be detrimental to the Northern Sacramento Valley’s ecosystems. The Sacramento Valley cannot sustain the extraction of more water from this region.”

The event took place as contributions to the Yes on Proposition 1 and 2 campaigns soared to $13,212,726 while corporate agribusiness, oil companies, billionaires, the health care industry and other corporate interests continued to dump millions of dollars into Jerry Brown’s campaign to pass the water bond.
(http://fppc.ca.gov/top10Nov2014/)

Six simple reasons why you should vote no on Prop. 1:

– Prop. 1 will fund costly and inefficient dams, and bill the public for the expense.

– Prop. 1 would support the Governor’s Twin Tunnels project as indicated by his Stanford speech on October 20. Brown said that Proposition 1 would provide components missing from the State Water Project “enacted by my father.” These components, Brown ominously intoned, would “deal with the Delta.”

– Prop. 1 violates the public trust. The bond provides hundreds of millions in funding to purchase water allegedly for public trust purposes, to then divert it from the Delta as “abandoned” water for billionaires’ almond orchards.

– Prop. 1 ignores the bedrock realities of California’s water dilemma. Consumptive water right claims in California already exceed the amount of available water by 5.5 times. Proposition 1 does nothing to rectify this situation. Indeed, it ignores the one thing that must be done if we’re going to stabilize the state’s water policies: balance water rights claims to actual water supplies.

– Prop. 1 provides no strategies to mitigate the impacts of drought. The bond is thus a classic bait-and-switch: It implicitly promises drought solutions it does not deliver.

– Prop. 1 underfunds recycling, conservation and other drought solutions that will provide local jobs and reduce reliance on imported water supplies.

For more information, go to http://www.noonprop1.org