Oppose the Weak CBR Resolution of the City Council! 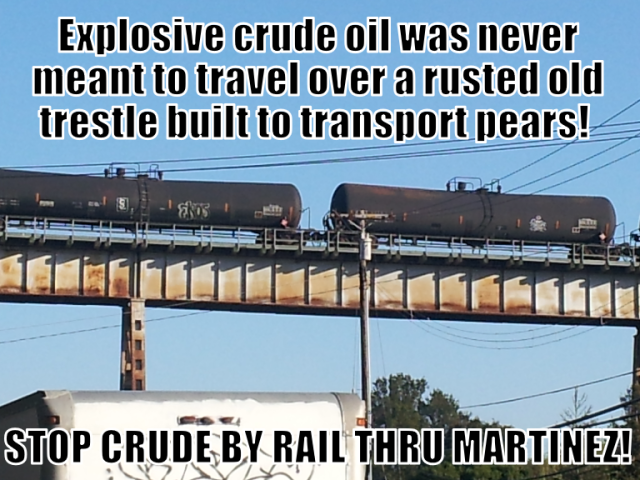 We need your voice at the Wednesday Martinez City Council to stop Bakken trains! The time has come…if you are concerned about explosive Bakken crude oil coming through Martinez every 7-10 days on its way to the Kinder Morgan railyard in Richmond (and then back to Tesoro by tanker trucks over Highway 4), we need you to make your voice heard at this week’s Martinez City Council meeting:

Wednesday, October 15, 7 PM
City Council Chambers
525 Henrietta Street (off Alhambra) in Martinez
On the agenda is a very weak resolution on “rail safety” introduced by Councilmember Menesini.  The proposed resolution does not include any provisions that the Martinez Environmental Group (MEG) has been advocating with the city for the past five months.   MEG is requesting that — like the cities of Davis, Berkeley and Oakland — Martinez needs to:
– take a stand to oppose the passage of dangerous crude through our town
– stay engaged and comment on local crude-by-rail projects that will                                     impact Martinez, as well as state and federal regulatory processes.
The proposal being considered on Wednesday does none of this.  It urges state and federal agencies to “be vigilant in enforcement and process” and expedite phaseout of older tank cars; the resolution also asks elected officials to enact legislation on safety.  The only action required by the resolution is that Martinez will “cooperate” with a vague and unspecified process on rail safety involving the California League of Cities. Compare the resolutions below.
This is completely unacceptable!  By introducing this resolution, our city leaders have failed to understand that:
– “safer” tank cars are already in use, but they have still derailed and caught fire.
– the City’s inability to commit to any real action on this issue is putting our entire town in danger.

We really need people to come and speak at public comment and/or show support in the audience.  Questions?  Email us at mrtenvgrp@gmail.com

For more information, compare the two resolutions below:

1) The MEG CBR resolution presented to the City Council in May of 2014 that they refuse to comment on. We have requested numerous meetings with council members to no avail. The link below includes a report with context for our desired resolution that was submitted to the Public Safety Subcommittee. https://mrtenvgrp.files.wordpress.com/2014/09/meg_cbr_sept_8_2014.pdf

2) City Council member Mike Menesini’s CBR resolution which is still in draft form and not on the agenda. We have alerted him that MEG is not in favor of such a watered down resolution.
http://martinez.granicus.com/MetaViewer.php?view_id=7&event_id=382&meta_id=80431

We are a community health and environmental group located in Martinez, CA.
View all posts by Martinez Environmental Group →
This entry was posted in Come to Meetings, Uncategorized. Bookmark the permalink.