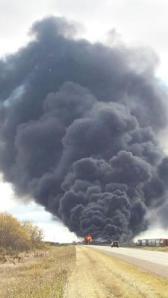 A freight train carrying hazardous materials derailed and caught fire in Saskatchewan on Tuesday, sending plumes of black smoke into the sky.

Several farms near the community of Clair, about 200 km east of Saskatoon, were evacuated, affecting about 50 residents.

Police closed a stretch of Highway 5 in both directions and kept people back for several kilometres, fearing toxic fumes.

Transportation Safety Board spokesman Rob Johnston said the agency is aware some of the derailed cars were transporting dangerous goods that were “combustible” and flammable.

It was not immediately clear Tuesday what they all were.

CN Rail told radio station CKNW that 26 of the train’s 100 cars jumped the tracks. Two of them containing petroleum distillate were in flames.

A team of TSB investigators were en route to the site Tuesday afternoon.