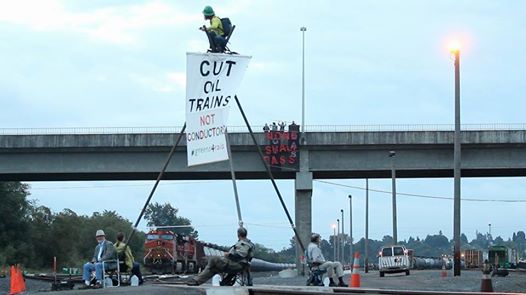 EVERETT, WA: Five local residents have stopped work at a Burlington Northern Santa-Fe Rail Yard in Everett by erecting a tripod structure on the outbound railroad tracks, directly in front of both a mile-long oil train and a coal train. Seattle resident Abby Brockway – a small business owner and mother – is suspended from the structure 18 feet above the tracks while four other residents are locked to the legs of the tripod. The group is demanding an immediate halt to all shipments of fossil fuels through the Northwest and calling on Governor Inslee to reject permits for all new fossil fuel projects in Washington, including proposed coal and oil terminals.

“People in the Pacific Northwest are forming a thin green line that will keep oil, coal and gas in the ground,” said Brockway, “Just one of these proposed terminals would process enough carbon to push us past the global warming tipping point – we won’t let that happen.”

Today’s protest has shut down work at BNSF’s Delta Rail Yard in Everett. With the increase of fossil fuel transport in recent years the yard has become a crucial staging ground for coal trains headed to Canadian export terminals and oil trains bound for Washington refineries. An oil train carrying explosive bakken crude oil sat stalled while the protest continued.

“Exploding oil trains running through my town are just a reminder of how out of control the fossil fuel industry really is,” said Jackie Minchew an Everett resident and retired educator locked to one of the tripod’s poles.

In a controversial move, Burlington Northern Santa Fe recently announced a tentative deal with union leaders to reduce train crews from an engineer and conductor to a single engineer. The oil train that derailed and exploded in Lac-Megantic, Quebec was crewed by a single engineer. BNSF claims that oil trains will continue to have two-person crews, but critics point out that nothing in the proposed contract binds the company to that statement. Under the proposed deal, coal trains would be operated by a single crew-member.

“BNSF is endangering workers, communities and our environment. They should keep the conductors and lose the oil trains,” said Brockway.

The surge in oil train traffic is already impacting passenger rail and agricultural shipments. Farmers from the Midwest to Washington State have faced what they call “unprecedented” delays in moving Wheat and other products to West Coast ports. Amtrak service through fossil-fuel train corridors has also suffered significant disruption, and officials have expressed concern that the problem will only get worse as more terminals come online.

“Railroads can be part of the solution, transporting crops and people or part of the problem with coal and oil. We should make that decision, not the fossil fuel companies,” Said Patrick Mazza, a longtime climate activist also locked to the tracks.

Mazza says he is taking this action for his daughter, who will turn 18 tomorrow.

“My last act as a father before my daughter reaches full adulthood tomorrow is to put my body on the line today,” Said Mazza, “It is up to us of the parental generation to do our absolute best to leave the least climate disrupted world we can, to put our bodies on the line to give our kids a fighting chance to deal with what we have left them.”

Development of extreme energy projects–like the Alberta tar sands, Bakken Shale oil and coal from the Powder River Basin–has fueled an explosion in proposed fossil fuel infrastructure in the Northwest. More than twenty new or expanded coal, oil, and gas terminals are proposed between British Columbia, Washington, and Oregon. In both states and British Columbia, these proposals have been met with fierce local resistance. Local communities have challenged both the safety of transporting coal, oil, and volatile gas through their communities and the role of fossil fuel export in fueling catastrophic climate disruption. Proposed coal terminals in Longview and Bellingham, and oil terminals in Vancouver and Gray’s Harbor, would lead to more carbon emissions than produced in the state of Washington each year.

“We could pass every climate initiative proposed by Governor Inslee, but if we let these terminals be built our future is on the chopping block,” said Liz Spoerri a Seattle middle school teacher also locked on the tracks.

While proposed coal and oil terminals have been controversial for years, climate activists in the Northwest have significantly intensified their tactics this summer. In Montana, residents sat on the tracks to block a coal train last April, and again on August 16,. In early July a woman locked herself to a 55-gallon barrel filled with concrete, blocking oil-trains at a Portland facility. In a similar action on July 28, three people blocked oil-trains at the Tesoro refinery in Anacortes by locking themselves to concrete filled barrels. Most recently, three Seattle residents, including state legislative candidate Jess Spear, were arrested blocking oil and coal trains near the Seattle Waterfront.

“People in the Northwest are not going to allow this region to become a fossil fuel superhighway,” said Mike LaPoint, an Everett small business owner locked on the tracks. “This is just a sample of the resistance that will happen if any large fossil fuel project is permitted.”

Despite controversy, the number of fossil fuel trains on Washington’s rails continues to rise. While larger coal and oil terminals are undergoing lengthy environmental reviews, projects at Washington’s refineries have brought approximately two oil trains per day to communities like Seattle and Everett. While the Department of Ecology conducts a study on the safety of oil-by-rail construction continues on a new terminal at the Phillips 66 refinery in Ferndale, and local officials are attempting to fast-track an oil train terminal at Shell’s Puget Sound Refinery without environmental review. Each of these projects could add up to six oil trains per week to the rails. Expansions at the Fraser Surrey Docks coal export facility in Vancouver, Canada, would increase the number of coal trains moving through Washington. Activists are demanding an immediate moratorium on all new fossil fuel terminals.

“Politicians play a blame game and talk about safety, but new terminals keep getting rubber stamped and built,” said LaPoint, “If elected officials won’t stop the fossil fuel takeover, we’ll have to do it for them”