Recently I have been spending more time in city and county meetings where the topic is theoretically how local government will regulate the activity of a local refinery – which is actually a multi-national multi-billion dollar entity with a local franchise.  Somehow during these meetings the regulation of health and safety of the community always seems to take a back seat to jobs and money.

Admittedly, Big Oil companies do have some expenses. But where they are spending this money 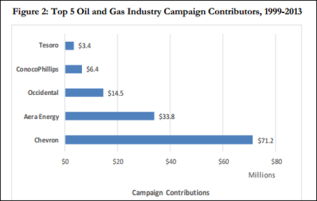 Over the past 15 years, Big Oil spent $123.6 million to lobby Sacramento and $143.3 million on California political candidates and campaigns. I wouldn’t know from experience but I’d bet you can make a lot of friends with that much money dropping out of your pockets, year after year.

These friends might attach more importance to Big Oil’s concerns about over-regulation than they would to a resident who might not have the funds to contribute to anyone’s campaign fund.

A recent report by the Alliance of Californians for Community Empowerment Institute (ACCE) and Common Cause, “Big Oil Floods the Capitol: How California’s Oil Companies Funnel Funds into the Legislature,” speaks to the extreme power of the Oil and Gas Lobby, as well as the Western States Petroleum Association (WSPA) in Sacramento.

Dan Bacher, California Central Valley reporter for IndyBay, in his review of the report, noted that the

“fact that the oil industry is the largest corporate lobby in California, one that dominates environmental politics like no other industry“ makes California “much closer to Louisiana and Florida in its domination by corporate interests.” 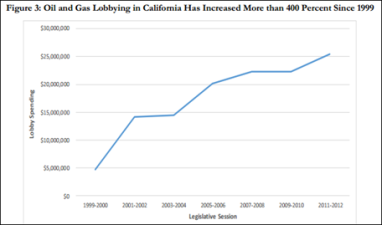 communities. Where I live in Martinez, the yellow Shell refinery logo is on virtually all city events including our local Earth Day celebration located at the historic home of iconic environmentalist John Muir.  In Richmond, Chevron ladles out millions of dollars to local social services nonprofits working with low-income Richmond residents while simultaneously polluting their community.

These kinds of donations seem  to  reduce  short term costs for the local government, but there is a very real long term cost as well.

And one of the most insidious dynamics is that city budgets are structurally reliant on tax revenue from refineries.   According to the Contra Costa Times, “tens of millions in Chevron tax revenue bolster the [Richmond] city budget, providing police and other services that similarly sized cities in Contra Costa County can only dream about.”

It certainly seems like Big Oil has a stranglehold on California politics and regulatory agencies. Recently, the Bay Area Air Quality Management District (BAAQMD) came out in favor of Chevron’s expansion project.  After being advised by members of the Stationary Source committee that the appropriate behavior would be to merely answer questions at the Richmond meetings, BAAQMD Chief Air Pollution Control Officer, Jack Broadbent, chose to sign up as a speaker at both Richmond public meetings. He spoke in favor of the Chevron project and formally stated that there was no scientifically feasible way to mitigate condensable particulate matter for the Chevron project. This kind of emission from refineries is composed of carcinogenic particles about 1 micron in width that can lodge deep down in your lungs – see reference below. 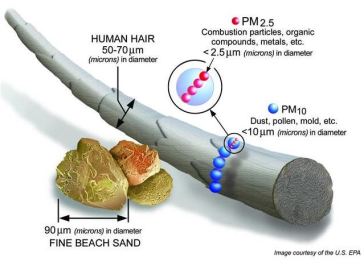 Prior to the two Richmond meetings, it had been clearly spelled out for the BAAQMD Stationary Source committee by multiple experts (with Broadbent present) that there was a mitigation technique (SCAQMD FEA Rule 1105.1) that would lessen pollution in Richmond by some 56 tons of the worst stuff you can breathe per year. And it has been mitigated since 2003 in the South Coast Air Quality Management District. So, choosing not to mitigate the really dangerous stuff pouring out of Chevron, like cancer-causing condensable particulate matter, is an impossible conclusion to reach by the authority charged with air quality control. Especially when you know otherwise. This is a 56 ton stain on the BAAQMD board and staff. And 56 tons of micron sized particles are unnecessarily heading for the lungs of the men, women, children, and animals that live or work in Richmond over the next year.

Is anyone at these BAAQMD meetings pushing for cleaner air except the community rights advocates?  What influence removes the teeth from the bill, waters down the regulation at the last minute, and causes people to lose their most basic moral compass?  A healthy community and environment should always be the priority.  And nothing should influence you to believe otherwise.