On a November morning in 2003, a sleeping Union Pacific crew missed a signal in Kelso, Washington. Their train collided with the side of an oncoming BNSF Railway train. Fuel tanks ruptured and spilled 2,800 gallons. Total damage neared $3 million. Unlike a similar collision in the same spot 10 years earlier, the crews escaped alive. 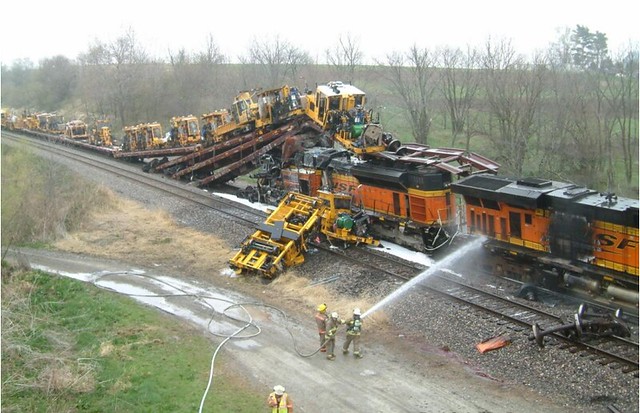 Firefighters spray the wreckage of a 2011 collision between a BNSF coal train and an equipment train. The collision was caused by crew fatigue. Photo courtesy of NTSB/Red Oak Fire Department

The primary cause, according to investigators from the National Transportation Safety Board: the crew’s fatigue, brought on by irregular work schedules and sleep disorder.

The NTSB had been asking the Federal Railroad Administration to address both issues for years. It made similar recommendations again a year later, after fatigue caused a fatal derailment involving chlorine gas in Texas.

Then in 2011, the crew of a BNSF coal train in Red Oak, Iowa, fell asleep and instead of stopping struck the rear of a parked equipment train, crushing the cab and killing the crew of the coal train, sparking a diesel fire and causing $8.7 million worth of damage.

The primary cause of the accident: the crew’s fatigue, brought on by irregular work schedules and sleep disorder.

Sleeping train crews are the primary cause in at least eight major train crashes investigated by the NTSB since 2000, according to the agency’s reports.

The true prevalence of fatigue in train crashes is likely far higher, said Mark Rosekind, a member of the NTSB specializing in the subject. Human error is the leading cause of train incidents and accidents, and Rosekind estimates fatigue underlies anywhere from 20 to 50 percent of those.

“It’s very likely we have grossly underestimated fatigue in pretty much everything we’ve looked at for a long, long time,” Rosekind said.

The rapid rise in shipments of hazardous crude oil has raised the stakes for addressing fatigue, he said.

Crude oil was once a rare commodity in rail cars. Last year BNSF, the leading crude oil transporter, hauled more than 600,000 barrels per day across its network, including as many as 18 trains per week through the Columbia River Gorge.

Fiery derailments have prompted intense public scrutiny and calls for improved oil train safety measures, including heftier tank cars and better-equipped emergency responders. Meanwhile, fatigued and unsafe crews remain an unresolved problem for the industry — a problem that rail workers and union officials in the Northwest say has worsened in recent years.

Railroad workers are more likely to get fewer than seven hours of sleep on work days, studies show. They also report sleep disorders beyond the norm for working adults. Crews fighting sleep deprivation are impaired at levels comparable to alcohol intoxication and can increase the risk of accidents anywhere from 11 to 65 percent.

Western railroads BNSF and Union Pacific say they are fully committed to fighting fatigue, and have been for decades.

Railroads educate workers about proper rest, help them get treatment for sleep apnea and experiment with more predictable work schedules.

Jackie Keenan, senior manager of occupational health and psychology at Union Pacific, said one of the keys is opening up communication about fatigue between crews and managers.

“Folks that work at UP know that fatigue is a valued, important issue,” Keenan said. “They know where to find our information, they know they can contact me at any time if there’s additional support that I can lend.”

Railroad industry accident and injury rates have fallen dramatically in the past few decades, but fatigue remains one issue safety advocates say hasn’t been adequately addressed.

Federal law caps rail workers’ shifts at 12 hours with at least 10 rest hours between shifts. It also limits the allowable number of consecutive work days. Even so, many industry practices persist that contribute to fatigue:

David Brewer, a former BNSF conductor in Havre, Montana, remembers a time he felt exhausted before he ever boarded his train bound for Whitefish. He warned his dispatcher and said he’d need a replacement crew at Marias Pass in the Rockies. When he approached the pass, he said, a replacement crew was not ready.

The dispatcher asked him to take the train over the mountain. But his engineer was already falling asleep, he said. They refused.

His account of the mountain pass echoes dozens of current and former workers’ sentiments about fatigue: it’s always there, and you’re expected to push through.

Workers and their unions attribute that expectation in part to railroad requirements that workers be available full-time, with few exceptions. Some have practices that identify employees for “low performance” who can then be subject to discipline if their hours do not meet the railroad’s expectations.

Herb Krohn, legislative director for the United Transportation Union in Washington, said railroads pressure fatigued workers into taking shifts out of fear of losing their jobs. He recalled one case in which an employee was disciplined for attendance despite working or being on-call for 85 percent of his waking and non-waking hours.

BNSF spokesman Zak Andersen said no employee who lays off for reasons of fatigue would be disciplined.

“The only time that would become an issue is if that was part of a pattern,” he said. He described a pattern as several times during a three-month span. “In that case, the railroad would work with that employee to find out is there an intervening factor that is preventing him from keeping with his duty and complying with the attendance policy.”

In rare opportunity, a report lost

Ask a hundred railroad workers about train-crew lineups, and you’ll get a hundred different horror stories, said Chris Malm, who spent 16 years with BNSF as a conductor and engineer based in Seattle before moving to another railroad in 2005.

His own: It was 3 p.m. and the lineup didn’t have him slated to leave till 9 the next morning. He laid down for a nap at 7 p.m., then got a call at 7:30 saying he was needed at 9 p.m. By the time he reached his destination terminal in Canada, he’d been awake for nearly 40 hours. Malm remembers times his conductor said he fell asleep standing up. It felt like he’d only blinked.

BNSF gave Malm and a fellow employee on the local safety committee nine months to study fatigue full time. They traveled to different terminals and company headquarters. They sat with train crews, managers and dispatchers. They turned in a 108-page report to management, a big piece of which dealt with inconsistent lineups, he said.

Malm said he was never asked about the report again. He never got an explanation as to why, nor did he ask. He doubts management ever read it.

“It pretty much was thrown in the trash as soon as we finished the committee,” he said.

When asked about the report, a BNSF spokesman said the company could not locate it.

Malm said frustration over the report influenced his decision to leave the railroad. He regrets not pushing harder and not following up with the report, though he’s not sure how far it would have gone.

“‘Safety, safety, safety’ is one thing,” Malm said, “but if your employees who are instrumental in making sure the freight moves, the customers are served, are walking around like zombies because someone in this chain of events who creates a lineup isn’t doing their job, and nobody is going to take action to make sure they do their job, then the fatigue portion of safety — which I think is huge — wasn’t that important to them.”

In the years since Malm left BNSF, the company started a pilot project giving workers predictive work schedules. Tested at select yards in Oklahoma, North Dakota and Nebraska, the program provides a detailed, set schedule eight weeks in advance for railroad employees like engineers and conductors.

“BNSF has long been a leader in fatigue countermeasures,” Andersen said. “Our newest work program, predictive work schedules, is the first of its kind that we know of where an employee knows exactly when he’s going to come on duty.”

BNSF has tried similar pilot programs in the past to solve the same problem.

William Keppen made a career out of trying to prevent sleeping train crews. Now an independent consultant to the industry and committees sponsored by the Federal Railroad Administration, Keppen worked in fatigue countermeasures for BNSF at a time when railroads developed aggressive fatigue-fighting plans in response to mounting pressure for changes in rail safety laws.

Throughout the early 2000s, many railroads quietly scaled back fatigue management programs, Keppen said. Some were terminated altogether for financial reasons.

Then after a fatal crash in California, a 2008 federal law made fatigue management plans mandatory — although there are still no rules in place to carry out Congress’s intent.

The FRA planned to issue guidelines in 2013 but still hasn’t done so. In a recent email statement, the agency said “the rule is forthcoming, but we can’t offer a precise timeline for its issuance.”

Some railroads have taken this into their own hands ahead of the FRA rulemaking. Union Pacific, for instance, developed a plan its officials say was vetted by five top independent fatigue experts.

None of these plans require mandatory medical screenings for issues like sleep apnea, which Keppen has been advocating for years.

The NTSB, too, has spent decades recommending those screenings for railroads, which remain the only major mode of transportation without them. Both unions and railroads have resisted mandatory screenings.

“There are a lot of people who think it would be a good idea,” Keppen said. “But there’s also a lot of institutional barriers.”

The FRA spent several years developing rules for medical fit-for-duty testing but decided not to pursue it because of high costs to railroads. In its report on the coal train collision that killed two BNSF employees, the NTSB stated it was “disappointed” in the FRA’s decision, stating that mandatory screenings might have prevented the wreck.